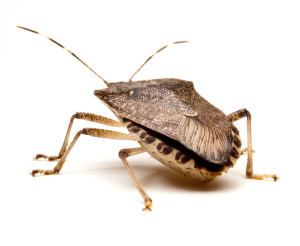 There are no home remedies for an infestation of Stink Bugs. These insects are relatively new to our area. Having no local, natural predators, they are growing and spreading at an alarming rate.

If you have a Stink Bug infestation in your home or office, call today for prompt, professional attention.

All Seasons Pest Control has beed helping resideSnts control Stink Bugs in their homes since the bug was first observed.

We have the knowledge and experience to help you control Stink Bug populations in your home.

Treating Stink Bugs can be a challenge for homeowners. In a recent video from NEIPM Research, Entomologist Tracy Leskey talks about how these insects can have a knockdown and recover effect where they appear to be dead and later recover.

The Brown Mamorated Stink Bug is an annoying and invasive insect that loves to overwinter in our attics and homes.

While the Brown Mamorated Stink Bug was imported to the United States, Hackettstown NJ, along with the Northeast Pennsylvania areas of Stroudsburg, Mount Bethel and Bangor have three native species of Stink Bugs

The Brown Marmorated Stink Bug is almost twice as long as our native species of Stink Bugs averaging 17mm over the 10mm of our stink bugs. The BMSB can also be identified by the marble-like pattern on its body.

History of the Stink Bug in the United States

The Brown Mamorated Stink Bug is believed to have been introduced into the United States in the mid-1990s. It is thought that it was brought to our area via international shipping. The first specimen was collected in Allentown Pennsylvania in 1998, it was officially identified in 2001, and confirmed in New Jersey in 2002.

According to Anne Nielsen, an Extension Specialist at Rutgers University, the BMST has over 100 host plants between both farm and natural plants. And the insect is mobile through its entire lifecycle. These two factors contribute to the insects ability to spread quickly and increase in population so rapidly.

Stink Bugs also recover quickly from their overwintering state. When temperatures rise, these bugs become active in about an hour and are able to fly nearly a mile just after waking up.

The Northeastern IPM Center has an excellent video series that details the history, behavior, and impact of the Brown Marmorated Stink Bug. They also discuss current research projects throughout the country which are being undertaken to help control these insects.

If Stink Bugs are taking over your home, we can help!  Call All Seasons Pest Control today!